Your Inner Fish:
A Journey into the 3.5-Billion-Year History of the Human Body 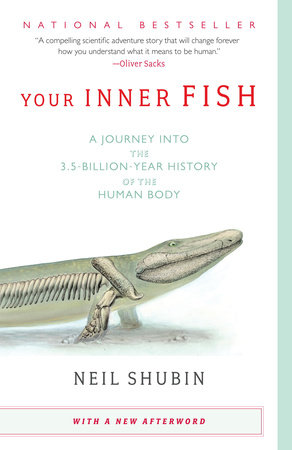 This fascinating read should have been called "The Zoo Within You" or "It All Began with a Pushup!". The author is both a paleontologist and an anatomy professor who takes the reader through an exploration of how the human body can be mapped to animals that are simpler versions of ourselves. This can be surprising for many, as most concepts of evolution taught tend to be very primate or even mammal "centric".

Shubin provides a fascinating description of his discovery of the fossil Tiktaalik, the "fish with hands, on Ellesmere Island in the Canadian arctic in 2004. This fossil was an intermediate specimen between a Fish and a Tetrapod. Like a fish, it had scales on its back and fins with webbing. However, it also had like early land animal's, bones that correspond to an upper arm, a forearm and even parts of the wrist. It also had shoulder, wrist and elbow joints inside its fins. Shubin was able to surmise that Tiktaalik was able to use its bone structure to prop itself up in a "pushup" like position in order to hunt and survive in shallow water and streams. A critical component to surviving and thriving in its primordial world. Tiktaalik was indeed the ancestor of the first animals that crawled onto and were able to survive on land.

Another interesting concept that Shubin develops in the book is that many of the human diseases we experience today have roots in our evolutionary makeup. He shows that obesity, heart disease and even hemorrhoids can be traced back to the fact that our bodies evolved from a hunter-gatherer lifestyle where we were very active. Yet today, our sedentary lifestyle has caused many of today's diseases as we never evolved to just "sit" and be idle.

There are many important "takeaways" that come through in this work to us as humans occupying this earth and walking upright. However, two messages stand out:

Get more information on books about Human Evolution

Get more information on books about Paleontology