In Search of Lost Frogs: The Quest to Find the World's Rarest Amphibians 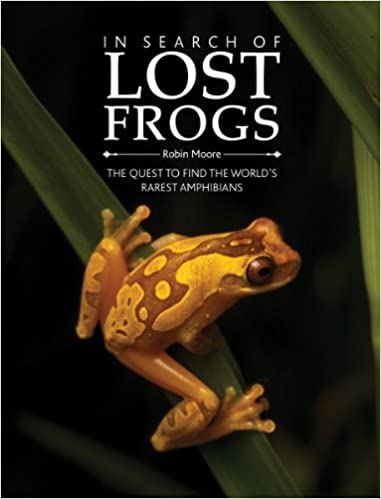 This stunningly beautifully book written by amphibian conservationist Dr. Robin Moore, asks the question: "What would happen if you simultaneously dispatched more than 100 researchers in search of dozens of missing frogs across the globe?" This book outlines the findings of "The Search for Lost Frogs" campaign that occurred in 2010.

Frogs and related amphibians have been disappearing across the globe at an alarming rate. This book outlines one of the key "smoking guns" in frog decline, the fungus Batrachochytrium dendrobatidis, Bd for short. This bacterium causes the infectious disease Chytridiomycosis in Frogs and other amphibians, and has caused catastrophic population decline.

Spurred on by this dramatic decline, Moore and colleagues from the IUCN Amphibian Specialist Group developed a "Most Wanted" list of the rarest amphibians to encourage scientists to go in search of creatures that had been lost to science. The campaign drew much needed media attention to the plight of frog population decline. Painstakingly, the list grew to 100 species last seen between 15 to 140 years previously. The project next drew up a list of the "Ten Most Wanted Frogs" as poster children for the search. These frogs were selected with the idea that their visual appeal would hook a great deal of sympathy from the general public. Among the top ten list were:


The book documents the many failures and successes of the "The Search for Lost Frogs" campaign. While many frogs were not re-discovered, there were some notable successes:

Significantly, Moore point's out in his book that Frogs are not "Giant Pandas". Frogs simply do not elicit the same emotion from the general public for conservation efforts that Giant Pandas or Polar Bears do. He points out that protecting Frogs and other amphibians will always be a struggle since most conservation organization funds go to protecting only 80 species, most of which are large-bodied animals. Large bodies animals also hold the interest of science as more than 500 times academic papers are published about them than amphibians.

Moore's book of beautifully photographed Frogs should help a great deal in developing sympathy for conservation efforts! Our key takeaway from this book is that we should advocate for the slippery, slimy and less attractive species of the animal world! Frog populations are declining at an astounding rate while the world obsesses about Polar Bears.

Get more information on books about Frog Conservation

Get more information on books about Herpetology

Get more information on books about Amphibians