A Fish Caught in Time:
The Search for the Coelacanth 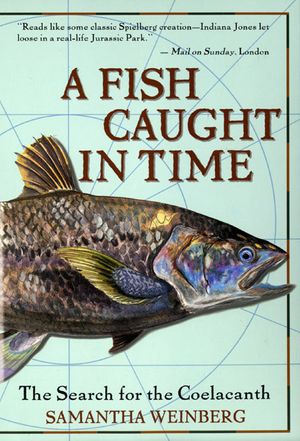 In December, 1938 Marjorie Courtenay-Latimer a curator at the East London museum in South Africa was examining fish that had been brought in on a fishing trawler at the local docks. She usually inspected the daily catch looking for specimens for the East London museum's collection. On this particular day, an unusual fish caught her eye. It was a beautiful odd looking specimen, approximately 5 feet long with hard scales, four limb-like fins and a strange "puppy like" tail. Marjorie realizing it was a unique specimen, quickly purchased the fish and rushed to locate enough formaldehyde to preserve it. She didn't fully realize it at the time, but she had made the zoological discovery of the century! The strange fish turned out to be a Coelacanth (pronounced see-lo-canth), a species believed to have gone extinct over 50 million years ago! This discovery set off a gripping tale of the attempt to locate more Coelacanth in the Indian Ocean. Probably just as interesting as this amazing discovery, is the interesting personalities that became associated with the search that are outlined in this book, chiefly:


The book also highlights the intense political competition that erupted between the French and English governments over the discovery and ownership of the Coelacanth specimens. Outlining once again, how politics can have a messy impacts on scientific discovery.

While the book is a fascinating read, its main theme should not be overlooked, "amateurs" in the natural sciences often can have astounding and everlasting impacts in these disciplines. So take heart, and carry on amateur naturalists!!

Get more information on books about the Coelacanth

Get more information on books about Fish Conservation