The Feather Thief:
Beauty, Obsession, and the Natural History Heist of the Century 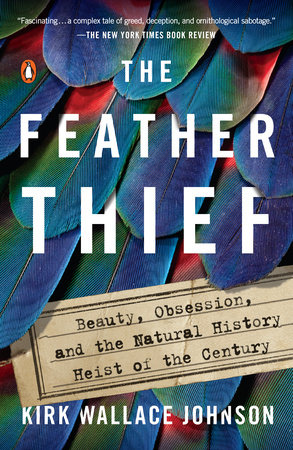 This book should be required reading for all museum curators. Curators may often forget during their busy day to day activities that they are charged with the caretaking of priceless artifacts. Artifacts that may attract interest from people with odd obsessions. Unfortunately for curators, some of these obsessions may lead to bad intentions against their collections. In this book, Kirk Wallace Johnson opens up to the reader the world of "Fly Tying". For the uninitiated, fly tying is the process of creating an artificial lure for fishing with the use of furs, feather, threads and hooks. This book focuses on the use of feathers from exotic birds in fly tying and how that obsession lead to a crime against one of the world's most foremost museum bird collections in the world. This collection was located at the UK's Natural History Museum storage facility located at Tring, England.

Before the story of this crime is detailed, the author examines how the obsession for birds and bird feathers over the years have had catastrophic effects in the Ornithological world. The book first examines how bird collecting for natural history museums began with Alfred Russell Wallace and then then Lord Rothschild. Many exotic birds were also slaughtered during the Victorian era for feathers as a part of a newly emerging fashion trend in hat making. The book details how the use of exotic feathers became an important part of fly tying in Kelson's Victoria era book, "The Salmon Fly" in 1895. This book created a rush for exotic feathers, resulting in the slaughter of millions of birds. Many of the birds feathers in Kelson's fly tying recipes were endangered and eventually came under trade restrictions in CITES agreements. As a result, fly tyers were forced to look for vintage hats or privately held bird skins in order to meet the insatiable demand for feathers. Unfortunately for them, there were only so many attics and antique dealers that these could be obtained from. This resulted in a huge pent up demand for exotic feathers. The few feathers that were on the open market commanded huge prices.

The book then turns to Edwin Rist, a 20 year old American Flautist. Edwin is an expert fly tyer and even at the tender age of 20 was considered to be the future of this past time. While attending the Royal Academy of Music in London, Rist broke into a side window of the Tring storage facility of the Natural History Museum and stole 299 bird skins from the vaults. He then sold feathers and skins on the fly tyer's electronic marketplace for several years before being caught by UK authorities. He avoided jail time by utilizing an "Aspergers's defence", by claiming he had a strong obsession for bird feathers and a deluded sense of right and wrong due to Asperger's disease. While the police were able to recover 174 skins, only 102 had scientific labels still attached, leaving the rest of the skins useless for scientific research. The author valiantly attempts to recover the other skins from a variety of sources in the fly tying community with no success. The question remained at the end of the book, what happened to the other bird skins? While this book is an excellent "who donnit" read, and is an eye-opening introduction to the fly tying world, it does raise several "Red Flags" warning lessons for museum curators. Chiefly;

Get more information on books about Fly Tying

Get more information on books about Museum Security

Get more information on books about the Museum Collection Management